Webinar This Week For Asia/Pacific

Do you live in Hawaii? Malaysia? Singapore? Australia? New Zealand?

Are you frustrated when you see announcements of webinars scheduled for the convenience of continental North American and European audiences?

Good news! The antipodean gang at Citrix Australia have invited me back to give another free webinar. This is your chance to ask me questions live and to join in the fun of an interactive webinar.

I’ll be giving tips on how to construct effective marketing presentations. I tend to focus on presentations intended for webinars, but almost all of the tips are appropriate to presentations made in person as well.

Please note that the topic is marketing presentations… My material is NOT a marketing pitch for me or for Citrix. I am sure they would love you to use their product, but they are very nice about letting me give a complete presentation full of directly applicable best practices without interrupting to say how wonderful they are.

The webinar is scheduled for Wednesday, 20 March (a day earlier for Hawaii) and will last for one hour, starting at 10am Singapore, 1pm Sydney, 3pm Auckland. Click here for a time conversion you can use to check the start time in your location.

To register, click here. I hope to see you online!

I love the fact that some of the big players in the web conferencing / webcasting space are giving us real data on usage, trends, and preferences from their users. Today I thank TalkPoint for making available the results of their December 2012 Webcasting Usage Survey.

The company surveyed their clients to find out about behaviors and predilections in webcasting (with additional emphasis on mobile usage). The full survey results are downloadable in a PDF from http://lp.talkpoint.com/Survey.html

Unfortunately there are no indications of the sample size, respondent demographics, or response ratio reflected in the result percentages. Which makes the data statistically unreliable, but some insight is better than none at all, so let’s dive in!

TalkPoint asked attendees what type of webcasting event they attend most often. Some of the options overlapped a bit, but the highest response was for “Best practices” events. That goes along with a question on what is the biggest deciding factor in registering for an event. The results weren’t even close… Speakers, length, date, cost, and educational credits accounted for a combined 11.9% while “Content” was an overwhelming 82.8%. So if you are sweating over how to get more people to register for your events, you have your answer. Stop worrying so much about Tuesday vs. Wednesday and 45 minutes vs. 60 minutes. Give people relevant best practices that they can apply in their jobs.

My next favorite takeaway from the survey came from a question about what bothered attendees the most (top pet peeve). Late starts? Poor audio? Too long? Nope… 24% said “Webcast doesn’t teach me anything” but the winner at 54% of responses was “Presenters aren’t engaging.” This is why I give online presentation training. Delivery matters!

There are plenty of other interesting informational nuggets in the report, but I will leave it to you to download a copy and find your own area of interest. I hope other web collaboration vendors will follow TalkPoint’s example and bring us additional insights as well.

The developers at omNovia have been on one of their development sprees lately. The webinar/webcast/web conference platform does not go through formal release cycles and version numbers. On any given day, you may log in to find some new functionality slyly slipped in. Fortunately, they have a web page to announce product enhancements. And that page recently got populated with some interesting new additions. Some of these are worth highlighting, as they are either uncommon or completely unique in the web conferencing industry.

Other enhancements will probably make sense only to existing omNovia customers and should be reviewed on the company’s website. There are changes to the way that different content areas can be sized, new search functionality in the shared notes area and the chat, a new safeguard in the selectable slide thumbnails area, and better management of presenter audio when bridging phone and webcast sound.

We need to recognize and appreciate new and innovative functionality in the web conferencing arena in order to keep the technology growing and evolving. I am always happy to highlight these kinds of value-adds for webinar hosts, presenters, and attendees. Well done!

In reviewing Twitter messages, it looks like WebEx was down from approximately 12:30pm to 2:15pm US Eastern time. Citrix seems to have been down from approximately 11:15am to 1:15pm US Eastern time. Those are very rough estimates… So far I have found no source for official information, logs, or company communications from either company, nor any statements about the outages other than a Friday tweet from each stating that “Service should now be restored.”

Citrix Online maintains a blog for their GoTo services. The last entry is dated March 7. Cisco maintains several blogs, including ones labeled “Collaboration”, “Cisco Support Community”, “The Platform”, and “Inside Cisco IT.” As of Sunday night, none of them mentions anything about the outage.

In looking through tweets from affected customers trying to run web meetings, it is easy to see that the primary frustration is lack of communication. Neither company had a formal communication policy for updating affected users. Neither company put any updates on their websites during or after the outage. One user posted this picture captured from the WebEx website, definitely giving the wrong impression: 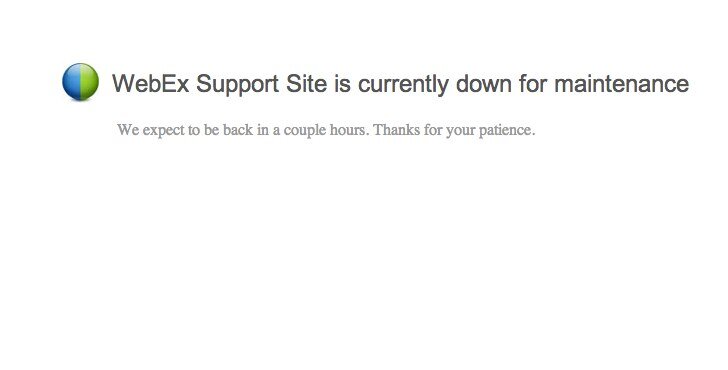 Others mentioned that they could not login to the WebEx support site to communicate, nor could they get through to the telephone support number (it announced that mailboxes were full).

I am sure both companies were scrambling like mad on Friday to identify and solve the problems while they were occurring. But since both services were restored in the early afternoon, it would have been comforting to see something later the same day acknowledging the disruption, with assurances that people were working to make sure it didn’t happen again. We didn’t see that. And we still haven’t seen it, more than two days later. In an international, 24x7 web-connected world, weekends don’t count. Two days is two days.

Maybe we will see more information from Cisco and Citrix on Monday. I hope so. When a “normal” company’s website goes down for a while, it harms that company and inconveniences their own business. That’s bad enough. But when a web conferencing vendor crashes, it harms the businesses of many clients. That is not just inconvenient… It demands swift and clear communications and resolution. Hosted service vendors who want customers to rely on them for real-time business operations automatically assume greater responsibility for real-time communications to those customers.

Onstream Media has offered high end enterprise and government webcasting for a long time now. I don’t write about their products much because they have always been sold as end-to-end service and technology bundles. Onstream prides itself on providing complete production and event management services for clients. That works well for mission-critical webcast projects, but may be hard to justify for smaller or lower-budget web events – or for companies that prefer to do setup and production themselves and merely want a solid webcasting platform to work with.

Starting today, I need to pay closer attention to Onstream Media as a “vendor of interest” for my readers. The company put out a press release announcing Visual Webcaster 4, which is targeted squarely at companies wanting to produce their own webcasts.

I got a sneak peek of this new version of Visual Webcaster in a demo earlier this week. I also had a chance to ask questions of George Stemper, the vice president of sales and development at Onstream and Sabrina George, the vice president of marketing. Seeing a demo is not enough to justify a product review, so we’ll leave that for later. I have asked them for an opportunity to test the product myself.

I asked Sabrina about the pricing model for Visual Webcaster 4. She told me they are allowing organizations to license its use for a single event or to take advantage of volume pricing for multiple events or ongoing use. Actual prices vary with options, capacities, and volume discounts, but I was impressed with the “order of magnitude” ranges she shared with me. For a serious high-capacity streaming webcast platform, it will not only be competitive with other products on the market, but will be significantly cheaper than many.

Some of the things I appreciated learning about during my demo and conversation included these positives:

I also noted some restrictions that potential customers should be aware of. I do not necessarily count these as product failings… Requirements and priorities for large scale streaming webcasts are different from those of more interactive webinars, and I accept some reductions in product flexibility in favor of reliability, ease of use, and performance. Still:

Once I get my hands on the software and have time to put it through its paces, I’ll add more impressions about specific functionality.