I registered for a webinar coming up next week. "Presenting from Your iPad - Living in the Unique World of Mobile Presentations." Sounds interesting.

The confirmation email I received started off with this marvelous warning statement (click to expand picture): 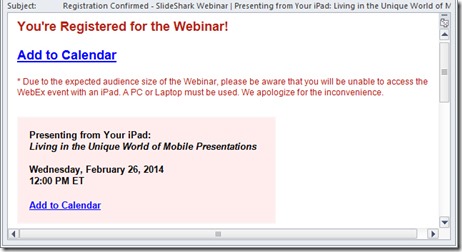 I'm still laughing. In the immortal words of Buck Murdock, "I guess irony can be pretty ironic sometimes."

Why didn't I know about this? Citrix has created a system status page for its GoToMeeting products. It went into play last August and I am embarrassed that I only now realized it.

Today I was having some problems with synchronization of audio and video in a GoToMeeting session. I tried reaching technical support, but there were very long waits on both telephone and online chat. I put out a frustrated tweet, and a representative responded very quickly, offering to help me. I definitely appreciated that.

I eventually managed to get through to a telephone rep who was also very helpful and went through an online test session with me. When time came to run our live webinar on GoToWebinar, everything went smoothly and we had no attendee complaints.

But I could have saved myself some frustration if I had known that I could get automatic notifications of significant system-impact events delivered right to my inbox. Just visit http://status.gotomeeting.com/ and you get the option to subscribe with your email address.

Looking at the page today would have shown me that the audio problems were not local to me, but a temporary system problem affecting some percentage of their users. That would have let me wait for resolution rather than bothering tech support. Once I know the company is aware of the problem and is working on it I can stop my own local troubleshooting.

I wish every web conferencing vendor would implement a similar system. And I wish I knew about all of them!

Thanks for keeping us users in the loop, Citrix. I hope this post helps people discover the resource you have built.

WebEx Goes Down But Keeps Recovery A Secret

Today (Thursday, February 13), WebEx had a service interruption. I'm working completely third-hand on this reporting, as I was not using the service myself. This post is not related to details about the nature of the crash, just the communication process to users. I have not talked to anyone at the company, so these are purely my personal observations as an outsider.

Looking over tweets from users, I see notices of the service being down starting around 1:30pm Eastern. At 2:10pm @revolize tweeted:

#WebEx Services were disrupted this morning. Most services are back online. Thanks for your patience! Will update.

At 7:17pm I still hadn't seen another tweet from their account. I tweeted asking for a status update. Were all services now online? Where was their follow up?

They came back quickly:

So all we know is that the company identified on its own overview web page as "the worldwide leader in networking" had problems with their internal DNS configuration. Humorously ironic, but hell… That stuff happens.

What bothers me is the irony invoked when you read the rest of the same sentence on that overview page: "the worldwide leader in networking - transforming how people connect, communicate and collaborate."

WebEx was unable to adequately connect, communicate, or collaborate with their frustrated users. I reported a similar story in March of 2013 when WebEx had a similar service drop. At the time I pointed out that rapid real-time communications and updates for users of a hosted service (particularly one dedicated to real-time communications and collaboration) was imperative and that Cisco needed to make better preparations and policies about keeping their very large user base adequately informed.

I don't believe that notification of full service restoration is too much to ask when your only previous note mentioned "most services." I don't think that "Will update" should leave a gap of five hours until someone prompts you to say something else. I don't think that "Contact your rep" is appropriate dissemination of information.

Cisco needs to implement better online status check tools and a better crisis communications policy. They host a globally-used real-time service and interruptions affect customers' businesses in significant ways. Those customers deserve better and more useful responsiveness. Because if the company doesn't say anything, the socially connected user community will, as this post from @hthomascap put it so succinctly:

@WebEx Very frustrating! Happy that we in the twitter community could talk amongst ourselves!

You're Excited? I Don't Care!

One of the many goals of marketing is to get your target audience excited about your company, product, or service. Announcing breaking news is a good way to do this. Press releases, Facebook updates, blog posts, and tweets are common ways to share exciting news with the public.

Unfortunately I see a common error repeated time and again in these announcements, reducing their effectiveness. The author uses a mistaken idea of "shared enthusiasm" to influence the readers' emotions. The error is easy to spot. Just look for a sentence starting with the following words:

The problem with this innocent-sounding phrase is that it shifts the value proposition away from the audience and towards you. If you're excited about it, I immediately know that the news benefits you rather than me. The fact that you are excited about something does not create interest and is not a newsworthy thing to be telling me.

Sometimes (especially in tweets), the fact of your excitement is the entire announcement! That's a total fail. But in many cases, the "we're excited" sentence is immediately followed by the sentence you should be leading with. You explain why you're excited by stating the value proposition for the reader. Just eliminate the lead-in and get right to the good stuff:

Do you see the difference in verb strength? Instead of leading with "we are" you lead with "brings customers," "gives you," "offers you," and similar statements of value delivery.

By the way, I am nowhere near as picky about this phrasing when used by a presenter in the course of a live presentation. In conversational speech where you are building a personal connection with your listeners, enthusiasm really is infectious. If you demonstrate a passion for your subject and your information, the audience feeds off that and can become similarly passionate about it. It just fails when written in a terse and impersonal business announcement.

Remember… The Pointer Sisters were not singing about a corporate merger.

Several interesting press releases crossed the wires today, so it's an appropriate time for one of my occasional webinar news roundup posts!

If you enjoy keeping up to date on news about webinars and webcast technology, make sure to bookmark my Webinar Success Industry News page. I keep it filled with links to press releases and articles (bottom of the page) related to our industry. You can also get updates delivered to your favorite RSS feed reader. The easy access web address is www.webinarnews.info -- Tell a friend!

Webcasting provider TalkPoint released the results of a customer survey they ran towards the end of last year. You can download a copy of the report from their website (free in return for your contact information): http://lp.talkpoint.com/WebcastingSurvey.html

Results come from more than 250 respondents who used an online survey tool. I asked TalkPoint if I could see the survey that was used in order to see how the questions were asked and what answer choices were included. Statisticians and market researchers know that the way questions are phrased can significantly affect the way people respond. It is very difficult to create an unbiased survey. Unfortunately TalkPoint refused to share the questions and detailed answer breakdowns, so we must rely on their edited summary findings.

One nice bonus to the report is a quick best practice suggestion from TalkPoint associated with each survey result. That makes it a more useful business tool for webcast administrators and presenters.

I certainly don't want to comment on every finding in the report, but I thought it might be interesting to look at a few notable (or confusing) items. 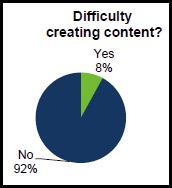 1) The first result comes from a question asking "Do you have difficulty creating  content?" with a simple Yes/No choice. Only 8% of respondents said Yes. As an audience member, let me tell you… You're being far too kind to yourselves! Sure, you don't think you have a hard time creating content. But that's because you are creating slides filled with text. Writing your presentation script on your slides is not particularly hard, but we have a hard time staying awake when you present it! 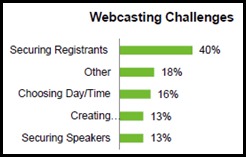 Strangely, when presented with a multiple choice question asking for your single greatest webcasting challenge, 13% responded "Creating Topic/Content." These two results seem to contradict each other. It is no surprise at all that the runaway top challenge was "Securing Registrants." 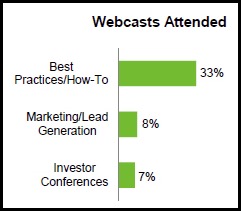 2) TalkPoint asked people what type of webcasts they attend most often. The top response was "Best Practices/How-To" with a 33% response rate. 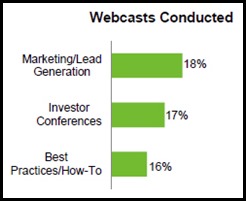 But when asked what type of webcasts they conduct the most, "Best Practices" languished at a low 16%. Take note, marketers! Content marketing is about giving your targets what they want, and what they want is tips, guidelines, and advice. Not a product pitch. Click here to read how to use this fact in creating an effective webinar/webcast title.

3) TalkPoint asked "What makes a webcast engaging?" and let people select multiple items from a list. Fewer than half included feature-specific items such as surveys/polls, video, and raffles. But 91% included "Interesting Speakers" in their answers. If you are unsure of the impact your presenters and presentation technique has on attendee satisfaction, look no further!

You can get the other results and the now-obligatory infographic chart from the TalkPoint survey link. It's always great to see additional studies and information in the field of web events. I applaud TalkPoint for sharing their information with our community.