News from web conferencing vendors has been slow over the summer months, but now that customers are back from vacation and kids are back in school, the digital wires are humming again. On Thursday alone, I saw six press releases and news stories of interest. As always, you can stay up to date on industry developments at www.webinarnews.info.

I'll try to stay on top of further developments as I see them!

Demos As A Part Of Marketing Webinars

Will you join me this week for a look at best practices when incorporating demos as a part of marketing webinars? I'll be speaking on Wednesday, September 14 at 10am US Pacific, 1pm US Eastern. This is a part of my ongoing webinar education series sponsored by BigMarker.

The program will include tips for making sure your demos are impactful, persuasive, and focused for your target audience. We'll look at how to combine live demonstrations with slide presentations in the same meeting. And I'll demonstrate techniques with a mini-demo to illustrate key guidelines.

The session is scheduled for one hour, including time reserved for answering your questions live in the meeting. As always, BigMarker makes these sessions available for free. If the link in the first sentence didn't show up in your feed reader, you can register at this short link: http://bit.ly/demos914

GoToMeeting, GoToWebinar, and GoToTraining have started rolling out a new release (v7.22.1, build 5530). Along with the usual and expected bug fixes and small enhancements, the most prominent upgrade is a change to audio selection. Participants will be able to choose between telephone and computer audio before entering a session (Windows users could already do this, but it's a new capability for Mac). If you select computer audio, you are immediately directed to a menu to select and test your input and output devices. If you select telephone audio, you get your dial-in codes and an optional country selector for local numbers. 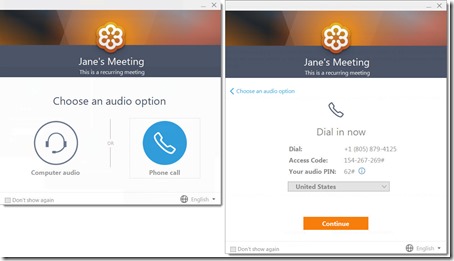 That should help to reduce confusion for first-time users. I find that web conference participants often have difficulties in finding the proper audio settings and getting their speakers, headsets, or microphones hooked up and operational in whatever conferencing software is in use. Things are even worse for products that rely on Adobe Flash or WebRTC to negotiate the local hardware/software interface, as those platforms insert their own authorization and settings windows outside of the conferencing vendor's control. GoTo products get to avoid that step, as the software runs as a locally downloaded and installed application.

I see in the release notes that GoToWebinar and GoToTraining operate slightly differently from GoToMeeting for first-time users. GoToMeeting newbies will see the audio selection screen, while GoToWebinar and GoToTraining newbies get computer audio assigned and are taken directly to the hardware selection and setup options. They can choose to switch to telephone audio as an alternative.

I'm happy to see additional thought and development efforts being spent on simplifying the conference joining experience. This can be a frustrating step in webinars and web meetings for hosts and participants alike.

Yesterday I saw a press release from AnyMeeting announcing version 4.0 of their web conferencing platform for small group meetings. The big news is that it uses WebRTC and promises no degradation in performance as the number of participants increases. I was intrigued and had a talk with Costin Tuculescu, the CEO and founder of AnyMeeting. We used the new platform so I could see it in practice.

Costin told me that early adopters have been exercising the new version for a couple of months, so the announcement does not indicate a beta or untested release. My first question was whether the new platform applied to AnyMeeting's webinar products or was only implemented for the meeting-oriented software. He confirmed that this announcement only applied to meetings (covering up to 30 participants). He expects the WebRTC implementation to transfer over to their larger-capacity and more feature-rich webinar solutions in the not-too-distant future.

One of the chief problems for WebRTC group collaboration is that the technology standard was originally designed to accommodate two-party peer-to-peer communications. It can get bogged down when trying to coordinate audio-video streams between many simultaneous participants. I'm going to brutally oversimplify AnyMeeting's approach to the problem, but it's easiest to visualize it by thinking of a centralized server acting as one party in the communication. So there is no physical "presenter broadcasting to an audience" using a one-to-many data stream. Each participant carries on a one-to-one collaboration with the server, which immediately replicates that conversation in a one-to-one fashion with each other participant. It's a "hub and spoke" configuration where no two participants are physically connected in a WebRTC two-way link, even though they get that impression.

I don't concentrate on following and reporting on peer-group web meeting products because there are so many on the market, and features tend to be less diverse and interesting than in webinar/webcast products. AnyMeeting fulfilled my expectations in this regard. Costin said that simplicity of use and quality of the communication experience was their top priority. So you get the ability to have a simple group text chat with lots of emoji icons, mimicking a mobile phone messaging panel. You can share your computer desktop to show your screen to other participants, or you can show an uploaded PDF, a PowerPoint file (which gets converted to a series of static images in PDF format), or an uploaded video clip. Up to 6 webcam feeds can show participant video simultaneously.

Screen sharing performance was pretty good. It runs at 4 frames per second, which is enough to show fade-in animations of small items on a PowerPoint slide, but is not fast enough to keep up with smooth thumb scrolling or wipes of entire screens. Audio-video synchronization was very good in our tests. I tested my audio on computer and on telephone, with no troubling lags through either channel.

I was very impressed by the uploaded video playback. Quality was very good, but more importantly, Costin could pause the video at any time and we both saw the exact same paused frame. Many technologies have a hard time keeping all video players in sync.

The press release indicated that audio is streamed at 48K for high quality sound, but it turned out to be the aspect that left me dissatisfied. I heard volume fluctuations as Costin spoke. He thought this might have been caused by WebRTC's automatic use of echo cancelation and gain control. If so, it represents an area that needs work.

Meeting 4.0 runs in all WebRTC compliant browsers and through dedicated free apps for Android and iOS mobile devices. Meeting participants using non-compliant browsers fall back to the previous Flash-based system and must use telephone audio rather than VoIP.

I'll come back and do a more thorough examination of AnyMeeting when they upgrade their webinar solutions, since that is the focus of this blog. But I thought it was worth highlighting the current WebRTC implementation during this difficult industry transition period.