Why You Need A Webinar Run Through

I often work with webinar guest speakers who tell me there is no need for a rehearsal ahead of time. They know their subject, they have delivered the speech before, and they know how to click through the slides.

Then we get into the webinar and I find there are embedded assets on their PowerPoint slides that the web conferencing software can't display. Or they have active links on their slides that they want to use to show content (or to have the attendees click on to interact with web content). Or they planned to offer documents or spreadsheets for attendees to use in exercises. Or they forgot they have build animations and transitions in their slides. Or it turns out that they are used to PowerPoint not showing "hidden" slides in slideshow mode, but the conferencing software displays them.

There is never a good excuse for not running through all session content ahead of time inside the web conference room. Even if the presenter(s) don't deliver the full speech, you still want to confirm proper operation of all materials.

As an example, yesterday I discovered a WebEx limitation I hadn't been familiar with. I started up a WebEx Meeting with PowerPoint slides, a Word document, and a video clip. I validated proper operation and display of each piece of material, each in its own tab… ready for display in the session. I started my introduction as host and then passed presenter control to my guest speaker. Much to our mutual amazement, three different behaviors occurred for the three loaded materials:

1) The PowerPoint slides stayed visible and operable by the new presenter.

2) The Word document was still in its tab in the meeting room, but the new presenter could not select and display that tab.

3) The tab holding the uploaded video clip was instantly deleted.

I had to take back presenter control, show the Word document, and reload/display the video. There would be no way to guess these behaviors except by loading all assets and actually doing the operational steps of passing presenter control back and forth.

In an attempt to forestall the inevitable presenter objections to "wasting time on a rehearsal," I have stopped using that terminology. I now tell them we need a familiarization/refresher session on the conferencing technology. Or we need a technical runthrough. Even if they (and you) have used the technology in the past, you may not know when the vendor has updated it or there are changes to the way it interacts with updated third party software such as Flash Player, Java, PowerPoint, or web browsers.

Never assume your content will work properly. Validate every single presentation asset and every handoff inside your conferencing product. Every time.

How To Disengage Your Webinar Audience In The First Two Seconds

Welcome to this article, "How To Disengage Your Webinar Audience In The First Two Seconds."

Looks pretty stupid in writing, doesn't it? Have you ever read a newspaper or magazine article that opened by repeating the headline written above the copy? I haven't. So why does everyone start their webinar by repeating the title written on their opening slide?

It's okay to mention the subject under discussion, but do it in a way that emphasizes the value they will get:

"I'm so glad you were able to join me to learn how you can disengage your webinar audiences more quickly and effectively. Let's get to it!"

Last Thursday I saw a press release announcing functionality enhancements for GoToMeeting, GoToWebinar, and GoToAssist. There were a few details that were unclear to me from the announcement, so I got clarifications from Daniel Waas, the director of marketing for GoToWebinar. It looks like the expanded functionality will further differentiate the Citrix GoTo family of products, as features are not shared between the various conferencing platforms.

CALL ME - In addition to being a bouncy tune from Blondie, this designates a feature planned for availability later this year in GoToMeeting only. It will give meeting attendees an option to have the conferencing software call out to their telephone as an alternative to making an inbound call to the conference and punching in a bunch of identification codes. I have used this functionality in other web conferencing products and I find it very convenient and handy. I'm hoping that once it gets validated in GoToMeeting, it will eventually make the jump to GoToWebinar as well. But there is no such announced transition plan (yet!).

iOS SCREENSHARE - For the first time, GoToMeeting presenters will be able to share their screen from an iPhone, iPad, or other iOS mobile device. That is going to make mobile app demos a lot easier for tech salespersons and marketers! This one is also slated for late 2016 availability. I'm not quite as concerned about this feature making the jump to GoToWebinar, as I don't believe mobile devices are optimal for presenting to a large webinar audience.

BROADCAST MODE - If you have felt constrained by the upper limit capacity in GoToWebinar for 1000 participants in a webinar, you will appreciate the option to use "Broadcast Mode." This will double your webinar capacity, with space for 2000 participants. But it constrains several features when activated… Attendees can only listen via computer, they must use the web browser app to join instead of the installed desktop app, their microphones cannot be unmuted, and they cannot be promoted to panelist or organizer authority levels. The feature is currently available in beta mode, with full production status targeted for Q1 of 2017.

SOURCE TRACKING - Heck, I covered this feature in August. It is also slated for production availability in the first quarter of next year. Again, this applies only to registration pages set up in GoToWebinar.

MOBILE APP ATTENDEE FEEDBACK - This feels like baby steps on the way to an eventual larger, more useful feature set. The idea is that GoToWebinar attendees can use a separate app on their iOS or Android mobile device to send a "heart" while watching a webinar. 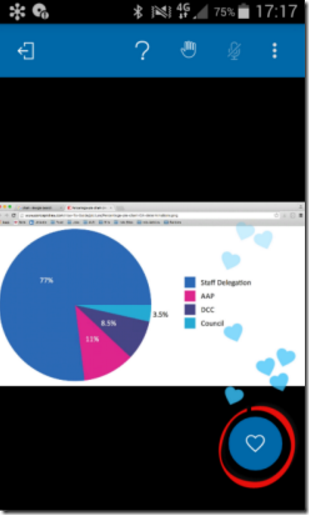 I don't like the cutesy little floating hearts in the provided screenshot above, and I think it has the potential for all kinds of misinterpretation and misapplication ("Ooh, I think the presenter is SOOO cute!"). This takes an existing Facebook implementation of a permanent status indicator on a static post and tries to turn it into a real-time feedback tool.

Presenters are then supposed to look at their own mobile device to see a miniature display of the current screen content with tiny indicators for overall audience attentiveness and the number of hearts that have been tapped. 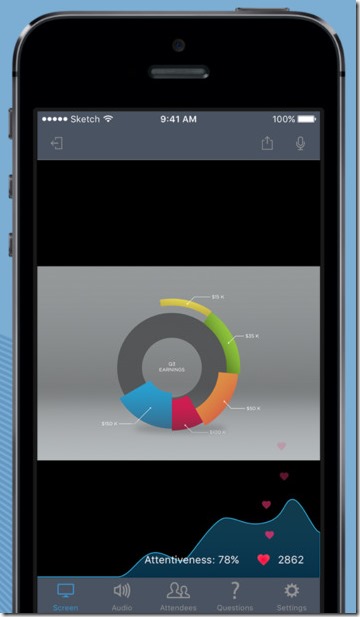 I can't imagine many presenters wanting to split their attention between devices in order to try to keep track of instantaneous indicators providing such dubious value. But I can definitely see this growing into a larger feedback mechanism for submitting and viewing poll results, votes, and more useful feedback indicators.

GOTOASSIST UI UPDATE - I don't have the details, as I don't cover remote support tools, but it looks like GoToAssist is getting a significant user interface update this month to make the experience more consistent and convenient across web and mobile devices.

I remain quite encouraged to see the ongoing emphasis on development and feature enhancement as the GoTo products transition away from Citrix corporate ownership. This bodes well for the health and viability of the entire product family.