The Hidden Messages In Stock Photography

Before you read any further in this article, take a moment to look at the following stock photograph. You can click to expand it and study it more closely. I wanted to stick a quick picture into one of my presentations to support a point I was making about attendees taking notes while listening to a talk. 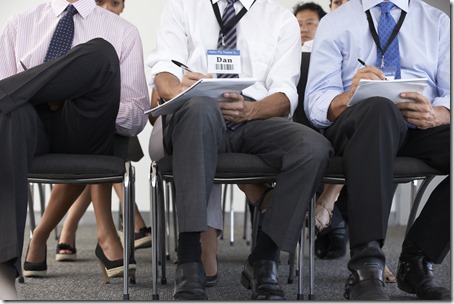 I happened to find this shot on Depositphotos, although the same image is available on BigStockPhoto, GettyImages, iStockPhoto, Fotolia, Dreamstime, and many other commercial sites.

When I first glanced at the picture, a few thoughts fleetingly occurred to me in roughly this order. I wonder if they went through your mind as well?

And then after all of those thoughts, I suddenly realized something else:

The minute I noticed that fact, everything else paled in comparison. I wonder if my female readers noticed the hidden women issue much higher up the "thoughts tree." I can't know… I'm trapped in a male's perspective, and initially the gender representation was invisible to me because I'm used to thinking about myself as a male audience member.

I wouldn't use this picture in a presentation now that I recognize how it might affect my audience's perception of me. That sounds egotistical, but it's not. I am not actually worried about my reputation or whether my female listeners would approve of my choices. I wouldn't use it because I want the audience concentrating on my message and the points I am making about the topic. If their focus is pulled to a side issue of thinking about whether I am a male chauvinist pig or whether I even noticed how it relegates them to second-tier status, then they have stopped thinking about the points I am making.

The point of a presentation is to inform, enthuse, influence, or prompt action from an audience. ANYTHING that distracts and detracts from that goal works against you. So take the time to evaluate whether others might see your picture differently than you do. Are there hidden biases inherent in the choice of models, settings, or poses?

Please note, there are practical realities to consider. You can't make every picture look like a perfectly balanced diversity poster. If you try to find photos that include "a man, a woman, someone older, someone younger, someone white, black, Asian, Hispanic, Arabic…" you are headed for disaster. Just mix it up a little. If you showed a Caucasian businessman on one slide, show an Asian female on another slide. See if you can find a photograph that happens to include someone in a wheelchair or in leg braces… And doesn't make that the focus and the point of the picture.

Stock photography sites by and large have a big problem with diversity. Women are regularly portrayed as over-sexualized. Caucasian representation is FAR greater than actual demographic percentages in the real population. It's hard enough finding an image that supports the point you are trying to make. Looking for diversity makes the job that much more challenging. But it's an important challenge to take on.

A while back, I wrote about one stock photography site that was trying to offer better, more inclusive choices of models. It has its weaknesses, but is still a great sourcing alternative to add to your search list.

And just to end the discussion on a lighter note, let me give a shout-out to a Twitter account called Dark Stock Photos (@darkstockphotos). This user has curated a collection of stock photographs available on major commercial sites. Each photo is stunningly inappropriate and disturbing. You can spend delicious hours scrolling through and trying to guess why some photographer felt the need to pose people in such a politically incorrect tableau. Easily offended viewers should take heed of trigger warnings. The photos often involve simulated death, danger, and involvement of children as posed models. But this is not a prurient site and there is no pornography or realistic violence.

Webinar vs Webcast - A Matter Of Timing

And so we once again come back to a favorite blog topic… Is there any difference between a webcast product and a webinar product? And if so, can it be defined?

Let's set aside the literal root word semantics of a webcast being analogous to a TV telecast or a radio broadcast… a one-way distribution of content to a consuming audience. Those still exist in some instances (such as sporting events or fashion shows), but in business use and conferencing vendor strategies, webcast products have become just as feature-rich as webinar products, allowing audience typed chat, polling, and other interactive elements. And webinar products can easily carry full streaming video and reach large audience sizes, so those are no longer useful differentiators. I have watched as vendors went back and forth, billing their collaboration products under first one designation and then the other.

I finally decided that the ultimate distinction between a webinar product and a webcasting product comes down to whether there is an expectation that the audience is communicating and collaborating in real time with the presenter. If so, you are working with a webinar technology. If the audio/video stream is buffered and fed out to the audience on a delay, it's a webcast technology.

The difference in experiences is significant. Even as little as a five-second delay between presentation and reception changes the nature of the interaction. In a webinar, I can ask for quick responses from participants and work those responses into the flow of my presentation:

But in a webcast, I have to ask for audience response and then keep moving on with something else, coming back to their responses later. I can't afford to wait for my words to make it to their computer and then for their responses to show up on my console (some - not all - webcast technologies buffer audience submissions or grab them every so often, so that a presenter may not see them show up for a while).

I am concerned about the move from Flash technology to HTML5/WebRTC as the underlying enabler for many cloud-based web conferencing products. At least one vendor has told me that the transition is going to mean changing from real-time synchronous reception of the presented audio and video to "a small delay" as they construct and encode the stream for transmission. I readily admit that I am not savvy enough to know whether this is generally true for everybody using the technology or if it is just one vendor's implementation. If it's a technology limitation, we are going to see a lot of webinar products suddenly behaving like webcast products. And that's going to mean retraining presenters to interact effectively with their audiences. Of course the "fat client" products that download and install on participant computers won't be affected.

I would love to get some comments from my more technical readers on whether HTML5 and WebRTC can support true synchronous audio/video transmission for large audiences. I'm fairly sure it can handle it for two-party peer to peer communications, but supporting a constant ongoing stream to multiple parties may be a different kettle of fish.

Today Adobe finally ended speculation and made formal the long-expected death of the Flash Player technology that has played such a strong role in web-based conferencing products. The company will stop updating and distributing Flash Player at the end of 2020. Adobe says it will continue to support the product until that time, but you can expect vendors to increase the pace of their efforts to move away from Flash dependencies.

I would expect that IT departments will also be ramping up their pressure to ban Flash on employee computers, making for an uncomfortable transition period as current web conferencing products become inoperative for larger numbers of participants.

Adobe Flash has been under attack for a long time, with the beginning of the end signaled in 2010 as Steve Jobs published an open letter entitled "Thoughts on Flash." He effectively banned Flash from use on Apple devices and mentioned HTML5 as the best candidate for a replacement technology (WebRTC came along the following year as a Google open source project). Apple eventually capitulated and allowed Flash content in 2011.

I started reporting on "The Problem With Flash" in February of 2009, and I have tried to keep up with developments, trends, and rumors ever since. If you want to take a walk down memory lane, you can visit some of these posts from The Webinar Blog:

Buckle up during the transition. There are likely to be some nasty bumps in the road as capabilities we had learned to expect with Flash no longer work the same way with HTML5/WebRTC.

Have you heard the phrase "Kill your darlings?" You might know it as a film title from a few years back, but that was taken from a well-known piece of advice to authors. In writing, you have to be willing to delete passages you particularly love if they don't add value to your work. It's easy to get so enamored of the way you wrote something that you lose the objectivity to see that it doesn't belong in the context in which it sits. (Fun side note: It turns out the first sourced use of the quote comes from Arthur Quiller-Couch in 1914!)

There are several ways that "your darlings" can reduce the effectiveness of webinars. Let's examine a few…

1) Favorite phrases or filler words. This is the most obvious, and you don't need me to spend much space on it. What starts out as a perfectly innocuous little turn of phrase becomes irritating and distracting through repetition. You will NEVER spot these on your own. You have to rely on a trusted confederate to point out yours to you, at which point you will rebel and argue that you don't use it THAT much. Listen to your friend. Kill your darlings.

2) Favorite slides. These often come from Corporate Marketing departments. They are the "standard slides we want in every presentation." When you hear that, your first instinct should be to delete the slide immediately. Make each slide PROVE its necessity for inclusion. Do you really need the slide that shows the number of offices and employees around the world? Does it support the points your audience came to hear about? Does it provide value, interest, and engagement? Do you REALLY need that agenda slide at the start of your presentation? Kill your darlings.

3) Speaker introductions and biographies. What is your audience's key interest and reason for attending? Is it to hear a long resume of each presenter's background, education, and work experience? Usually not. So why is that the first thing you present them with? Kill your darlings.

4) Extra registration fields. Do you really plan to telephone, fax, or send postal mail to every registrant? If not, why are you asking for their telephone, fax number, and zip code? If it's because "that's our standard registration form" then it's time to kill your darlings.

5) Devotion to your planned presentation. This one applies to small presentations where you are speaking interactively with maybe 1-5 attendees. Sales calls and analyst reviews are two examples. If your listener tells you they are already familiar with your company and want to focus on a particular topic point, DO IT! Don't go through your first 10 backgrounder slides just because those are the first things in your deck. Kill your darlings.

Okay, I got you started. Why not add some other examples in the comments? We can all share and learn from each other.