Hey Webex, Get Your Damned Logo Off My Content!

I am old enough to remember a time when you could watch TV programs without seeing a constant stream of overlaid promotional graphics at the bottom of the screen. How primitive we were!

If Cisco Webex is any indication, we can now expect that same kind of visual clutter and distraction in our web collaboration software.

Take a look at this screenshot I snapped from a web conference I set up in Webex Meetings. It is an attendee view of a presenter sharing his computer screen. This is a common way for presenters to show slides, web pages, or software applications. You can click on the image to see it full size in a second tab: 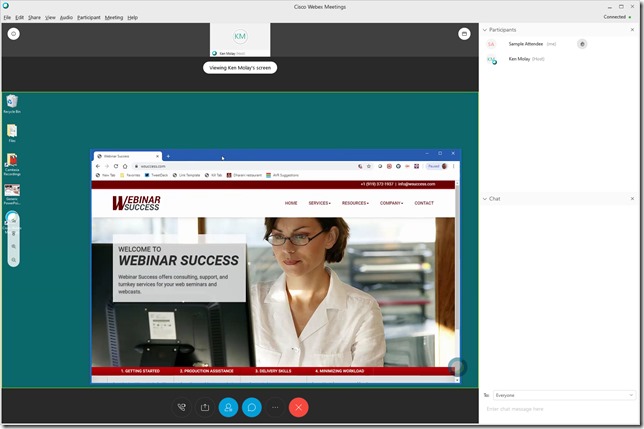 What is that semi-transparent circle at the lower right of the image area? It's not on my presenter's computer screen. Oh, it's a watermark image of the latest Webex green and blue circle logo. Stuck right there on top of my content. If I'm showing carefully designed slides, the audience sees them with that overlay. If I'm showing a demo of my software, it shows up with the Webex logo in the corner.

This is simply unacceptable. The display of user content must be sacred. The vendor does not get to place their branding on top of mine.

Just add this to my list of "How Cisco Ruined Webex Meetings" and "Even More Webex Frustrations." I sometimes feel like the UI design engineers are having a competition to see how annoying they can make their product interface.

Several years ago, the University of California at San Diego did a study on spoilers. Psychology professor Nicholas Christenfeld wanted to know how much spoilers ruined enjoyment of a story.

The findings were surprising and counterintuitive. Readers were given any of three versions of a story. The versions either presented the story as written with the original surprise ending, or included a prefacing spoiler before the story started, or had a spoiler paragraph stuck in the middle as if it were a part of the work. The study tested ironic twist stories, mysteries, and straight literary works. In all three cases, readers preferred the “spoiled” version over the surprise version. Huh!

How does this relate to the world of business presentations?

The most common way to construct business presentations is to build them linearly. You start from background, add some facts, and then reach a conclusion as “the big reveal” at the end. The belief is that if you give away the conclusion at the beginning, there is no reason for people to stick around. You’ll lose their attention and probably their business.

But it turns out that your audience is not that shallow. You don’t need to surprise them to satisfy them. In most cases, you are better off establishing your main point right up front. Don’t start with “First the Earth cooled, then microorganisms emerged…" then end up 60 minutes later with “Ecce homo! Modern man!”

Instead, try turning it around. “Modern man! The culmination of eons of evolution. How did we get here?” Now you have established your main thrust right up front. If an audience member gets an emergency call half way through the presentation and has to leave, they have still received the key message you wanted to convey.

In newspaper writing, this is known as The Inverted Pyramid. Start with the main point of the story. Then fill in supporting facts and background later. The news reporter does not start with the history of railroads in the U.S., the development of the automotive industry, and then in the last sentence work up to the fact that a train hit a car yesterday. That information is the lead (or lede in journalistic lingo).

Think about a prosecutor’s opening statement to a jury. The first thing he or she says is “This man is guilty. He committed a crime. You are going to hear the evidence over the next few days and when you do, there will be no doubt left in your mind that he needs to go to jail.” No prosecutor in his right mind would ever build up to a surprise ending that the defendant is… (gasp) GUILTY!

Don’t be afraid to tell your audience up front that your product or service solves a problem. Don’t be afraid to give away the results of your study in the first slide. A well-designed and well-delivered presentation will hold interest even without a surprise conclusion. According to UCSD, your audience is likely to prefer it that way.

What Webinar Assistance Is Available?

Do you have a sneaking suspicion that your business webinars aren't as good as they could be? Do you sometimes feel overwhelmed, trying to manage your webinar process when other duties are screaming for your time? Do you wish there was a way to improve audience satisfaction and boost the ROI of your webinars?

Call on Ken Molay at Webinar Success. For 15 years, Ken has provided companies with exactly the kind of support you are looking for. Ken has a background in information technology, business marketing, public speaking, and training. He has led development of large-scale commercial software products and was a Director of Product Marketing in a major Silicon Valley technology company. He has crafted and delivered successful and persuasive webinars for decades, and now helps companies achieve that same level of quality in their online presentations.

Webinar Success is a services-only company, independent of any particular web conferencing vendor or product. Some of the most popular services include:

Better results are within your reach. Visit the Webinar Success website to learn more. Do you know someone who works with webinars? Do them a favor and click here to forward this message to them through your own email.

It's an anniversary month! 15 years ago, I quit my product marketing job at a major Silicon Valley tech company and started Webinar Success. In the past 15 years, I've seen a lot of changes in the web conferencing space. I thought I'd have a little fun and take a run down memory lane.

In August 2004, nobody had heard of YouTube, the Apple iPhone, Blu Ray discs, or Google Maps. "TheFacebook" had launched earlier that year as a locally-available service connecting students at Harvard. Barack Obama was not yet a US Senator.

I spent a lot of time explaining just what the heck a webinar was and why it had business value. Lexical purists frequently wrote angry comments on my blog posts, decrying the improper root structure of the coined term and pointing to it as a sign of the impending collapse of civilization.

GoToWebinar would be introduced in 2006 and would take the shocking route of publishing standard pricing right on its website. Pricing was low enough to be considered "disruptive" in the industry. The product would later be acquired by LogMeIn.

All of these products required participants to download and install software on their personal computers. Mobile access was not a consideration, as mobile computing didn't exist.

Macromedia was just starting to experiment with a bold new idea… Using its Flash multimedia player to deliver realtime communications entirely within the web browser. It created Breeze Live (renamed to Breeze Meeting, and then supplemented with Breeze Events and Breeze Presenter). The company would be bought by Adobe and the Flash-based, web-hosted webinar product would get a new name as Adobe Connect.

My early years involved a lot of guest speaking for the various webinar vendors, covering topics such as how to plan and organize effective business webinars, how to be a good presenter in the new online communications world, innovative ways to use and benefit from webinars, and how to make the best use of features such as typed chat, interactive polls, and shared screen annotations. These have become commonplace subjects that all the vendors now include as part of their content marketing programs, and I'm proud of the impact my early work had on helping to promote better quality and value for webinar hosts and audiences alike.

I started my blog in 2005, concentrating on usage tips, reviews and opinions about webinar technology offerings, and coverage of significant news and announcements in the webinar space. I have tried hard to keep it a highly-focused business offering, free of "what I had for lunch today" fluff. I have also refused numerous requests over the years to run vendor advertisements or revenue-sharing offers. I do not accept advertising from any web conferencing vendor and I do not take cuts of license fees if people decide to use one product or another that I happen to mention. I also will not accept money to do an "advertorial" review or promotional piece. If I write something about a vendor or a product, it's what I truly believe.

I still love what I do after 15 years. I have no other employees, no hiring and firing headaches, no staff meetings and status reports, no concerns about how to constantly keep growing revenue. I concentrate on offering personalized service with the highest quality care and results for my clients.

I can't thank you enough for being a reader, whether you started following me recently or have been a part of the journey over many years. If you have read this far, I am going to ask one favor… Tomorrow I will post a short, descriptive blog post about my business offerings and services I offer. If you could forward that to one person who works with webinars in their business, it would help me spread awareness and develop greater reach. Word of mouth from trusted peers is the best possible recommendation, and I truly can't do it without you!

Here's to another 15 years of watching webinar technology and webinar quality continue to improve and produce ever-greater business benefits.

My thanks and appreciation,

Today's Friday Fun Fact is not directly related to webinars, but it's awfully useful when composing text in almost any type of material: PowerPoint, Word, Excel, Instant Messenger… you name it.

Instead of hunting around in your application for the command button to "Insert Special Character," you can hold down the Windows key on your keyboard and press the period key ( WIN + . ).

This brings up an overlay menu with a bunch of selectable graphics that you can insert into your text stream. The default display is emojis: 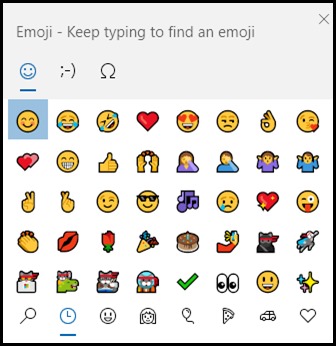 There are two rows of menu items to switch the displayed collection. They don't immediately stand out from the rest of the graphics, so you have to know to look for them. At the bottom is a row that groups icons into "families" that are marginally related by some theme. At the top is a higher-level selector that brings up other types of inserts.

The smiley face (second selector) lets you choose from something apparently called kaomojis. My internal name for them is "winkies": 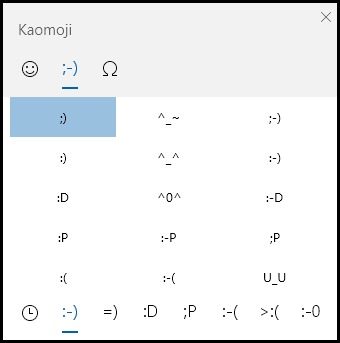 The third and final selector gives you all the symbols and special characters you normally have to hunt for: 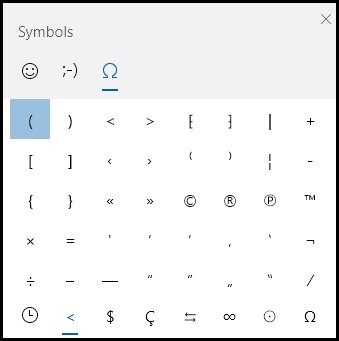 I love having quick access to things like copyright and trademark symbols. The bottom row of theme selectors opens up even more usefulness. For instance, clicking the Ç selector gives you foreign letters: 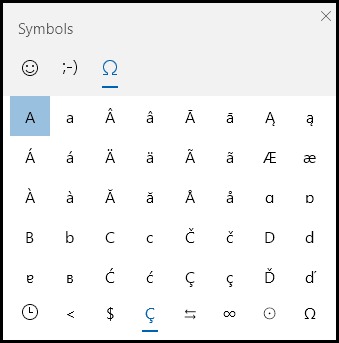 You can usually just click the ESC key on your keyboard to make the popup go away, but you can always use the standard X at top right to close the window.

CAVEATS: This is implemented as a bundled feature in Windows 10. The emoji picker has been around for a while, but the special characters/symbols menu just got added in a recent update, so make sure you have upgraded your copy of Windows. I'm not a Mac user, but it looks like similar functionality is included on MacOS systems with a CMD-CTRL-Spacebar sequence.