Today I saw a tweet from a presentation trainer whom I know and respect. They wrote that in a training call, they used an analogy referencing a 1980s Sally Struthers ad campaign about feeding children. It landed flat, leaving the audience bewildered.

Last night on the Oscars, quite a bit of attention was paid to the Will Smith/Chris Rock altercation. But I wonder if younger viewers had any idea what Rock was talking about in his joke when he referenced “GI Jane 2?”

My adolescence took place during the 1970s. There was no internet. No smartphones. No DVRs or VCRs or home video. There were three network TV stations, carrying 99% of the programming that people regularly watched.

My point in bringing this up is not that things were BETTER then… Just that things were DIFFERENT then. If you consumed a piece of popular culture, you consumed it in the same way at the same time as everybody else in the country. We saw the same commercials because there was no way to skip them. We saw the same episode of the same popular TV shows on the same night and then talked about them the next day at work or at school.

As a result, we shared media-generated cultural touchpoints in a way that is almost inconceivable today. So many people watched the same things and discussed them at the same time… Then they took on even more staying power based on the references ABOUT the original moments, as comedians and parodists used them to connect with their audiences over weeks, months, or years.

It’s very easy for people who came of age pre-internet to communicate in a series of catchphrase references, simply expecting others their age to understand not just the source, but the underlying meaning expressed by use of the quote.

A very gradual weakening of this homogeneity started happening as more TV channels became available, with more programming choices. By the 1980s, home video rentals made a wider choice of movies available from a wider timespan, and home recorders made it possible to time-shift viewing. But it’s the growth of the internet and social media that has undermined the entire concept of a time-based shared cultural experience.

Nowadays, nobody is expected to have seen anything at the same time. “Don’t mention anything about that show or movie… You’ll spoil it for me!” Cultural touchstones may indeed pop up, but they have far shorter lifespans. I get an email each week covering the top memes of the preceding week.

News and entertainment is concerned with collecting instantaneous clicks and views, which means they have to constantly move on to the next “Shiny New Thing.” There is precious little time for things to settle in and collect cultural resonance by comedians and parodists using them as a base point over a long period of time. If Colbert or Kimmel or Fallon makes a joke reference about something, it’s unlikely to come back for another reference the following night… They’ve moved on to the next item that has briefly caught public attention.

Earlier in this post, I referenced the Oscars broadcast with an oblique reference to Will Smith and Chris Rock. The global viewing audience size and amount of coverage the incident received makes me fairly comfortable that you knew what I was talking about today. But would I embed the reference in a presentation I planned to deliver in a month? Probably not… I don’t trust it to have that much staying power in the minds of the general public.

What does all this mean to you as a presenter? You need to watch out for assumptions of shared knowledge, experiences, and memory among your listeners. You’re dealing with different ages, different time-shifted consumption of media, different niche interests being served by online micro-communities. Things that were briefly popular may have faded from memory before you ever deliver your presentation (or may fade over the lifespan of an evergreen presentation that gets reused over time).

And this doesn’t even address the international multi-cultural problem presented by our globally-connected world. I used to give presentations to people primarily in my own country. Those days are long gone. Now even if I find an audience my own age, they may be located in countries that never saw the same programming or wildly popular movies we all experienced together here in the USA.

In most cases, for public presentations where you don’t know the makeup of your audience I recommend staying away from popular culture references. If you really feel it’s important to your message, give a little context for the people unfamiliar with your source reference. And ALWAYS explain the meaning or point you want people to take away from the reference… Never assume that they know what you were trying to communicate by making the allusion.

After all, you want to end up like Darmok and Jalad at Tenagra, not Shaka when the walls fell! *

Technorati Tags: presentation tips,presentation training,presenter training,speaking tips,speaker training,webinar,web seminar,webcasting,webcast
* The closing line is a reference to an episode of Star Trek: The Next Generation that postulated a culture that communicated entirely in references and allusions to shared stories. It means you want to gain understanding and cooperation with your colleagues rather than failure in your presentation.

Come, let’s engage in a little blue sky speculation. This is going to be one of my infrequent posts talking about financial considerations, so disclaimers are important:

With all that out of the way, I found myself thinking about ON24 today and wondering if they aren’t an awfully attractive takeover candidate at the moment.

The company went public on February 3, 2021. The IPO was officially priced at $50/share and the stock opened for trading at $77/share. They sold around 8.6 million shares to the public and had a first-day market capitalization of more than $3.42 billion.

Thirteen months later, the stock price closed on Thursday under $14, up from a low of $11.20. The current market capitalization is around $655.5 million. The company is facing a class action lawsuit claiming that the IPO Offering Documents were false and misleading.

Would this be a good time for a larger entity to scoop up ON24 at a bargain price? I can think of several companies that could conceivably see it as a canny move.

ON24 is not interested in the peer-level web meeting space. They aren’t going to compete with low priced Zoom, Webex, and Microsoft Teams meeting offerings. ON24 is a big-ticket offering designed for large enterprises to offer large audience webinars and webcasts. The company has made a definite push over the last year to play up a larger “digital experiences” story combining the delivery of web events with marketing, customer relationship management, lead tracking and development, and digital resource management.

So who might want to acquire that sort of technology stack?

I doubt that Microsoft would want to muddy the waters and try to integrate ON24 with its own Teams play. They tried buying a webinar offering years ago and it didn’t go well for them (buying Placeware and renaming it to Microsoft Office Live Meeting).

I discount most of the other existing players already in the webinar/webcast space. If they have enough capital to make the purchase, they don’t need the technology. They’d be buying ON24 purely for the customer list. And those customers would eventually end up angry at being forced to switch their product licensing. PGi is maybe the only vendor that might consider it. They were on an acquisitions kick before the pandemic, and their own GlobalMeet Webcast platform seems to me like it never developed the public recognition and awareness enjoyed by ON24.

But my top candidates are Salesforce and HubSpot. Salesforce has been talking about plays to boost its performance, with co-CEO Marc Benioff telling Jim Cramer recently that “there’s no finish line when it comes to making acquisitions.” They already bought Slack for peer-to-peer collaboration and might want to add a large presentation offering to keep enterprise customers tied into an end-to-end Salesforce technology stack. Salesforce has a market cap of more than $208 billion and wouldn’t even blink at the purchase price for ON24.

HubSpot has a smaller market cap, at $22.2 billion, but their stock price is very high and they have made lots of integration plays with webinar/webcast vendors. They might want to more closely tie enterprise customers into an end-to-end play with promotion, delivery, tracking, and follow-up of digital event attendees all taking place within their own technology stack.

Who knows? Maybe this is all just intellectual game-playing for my own amusement. But I have to say that the possibilities are tantalizing, and if I heard about ON24 being acquired this year I certainly wouldn’t feel surprised.

Are there any other big players you would think of as potential contenders for scooping up ON24? Let me know in the comments.

Well, we’re getting towards that time of year again… The “danger weeks” when locations start changing between Standard Time and Daylight Saving Time. Here in the United States, some states (or even localities within a state) may choose to use DST while others won’t. Meanwhile, standard offsets that you have memorized between cities you use a lot (like New York – London) will be wrong for two to three weeks as the US makes its shift two weeks earlier than UK/Europe and three weeks earlier than Australia.

But the challenge doesn’t just apply to March. In our globally connected world of online meetings and webinars, planning session times is a critical planning step. What time(s) should your webinar be held in order to reach the attendees in all your target locations? What time should you make your prep session in order to accommodate your presenters in various countries?

Never assume you know what time it will be in another location on any given date. Localities can adopt their own time zone and use of DST and change it at will. I have long relied upon www.timeanddate.com for its great collection of global time utilities, such as the Event Time Announcer that lets you copy a link with worldwide time equivalents for a given day/date.

Here’s a great way to keep a handy global time chart available to help you with planning an international meeting or webinar. It’s really just a way to speed access to the World Clock Meeting Planner on the above-mentioned website.

Start by setting up the cities you work with the most or that give you the best quick view across your target geographies. Feel free to start with my list of cities covering lots of time zones (apologies to Central/South America, Africa, and other areas not included in this list… It’s just a starting point!). Pick some date in the future. Save the resulting reference grid page as a bookmark in your web browser. I use mine so much, I put it right on my quick access bookmarks bar in Chrome, as highlighted at the top of this screen shot: 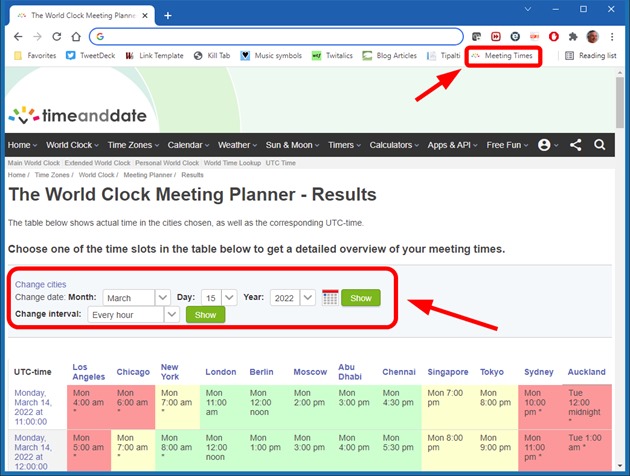 Now any time I want to plan an event, I can click the bookmark and change the date in the quick selector I highlighted in the middle of the screen shot. Voila… I get an easy to read chart that properly accounts for all local time zones and DST offsets in each location for the given date. No guessing and no assumptions.

No browser should be without it.